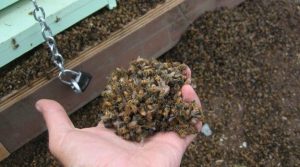 Millions of bees dropped dead after GMO corn was planted few weeks ago in Ontario, Canada. The local bee keeper, Dave Schuit who produces honey in Elmwood lost about 37 million bees which are about 600 hives.

“Once the corn started to get planted our bees died by the millions,” Schuit said. While many bee keepers blame neonicotinoids, or “neonics.” for colony collapse of bees and many countries in EU have banned neonicotinoid class of pesticides, the US Department of Agriculture fails to ban insecticides known as neonicotinoids, manufactured by Bayer CropScience Inc.

Nathan Carey another local farmer says that this spring he noticed that there were not enough bees on his farm and he believes that there is a strong correlation between the disappearance of bees and insecticide use.

A new study published in the Journal Proceedings of the National Academy of Sciences revealed that neonicotinoid pesticides kill honeybees by damaging their immune system and making them unable to fight diseases and bacteria.

The research team in Italy suggests that exposure to neonicotinoid pesticides results in increased levels of a protein in bees that prevents an important molecule involved in the immune system respond making bees more susceptible to be attacked by harmful viruses.

The findings of the leading author of the study, Francesco Pennacchio, and his colleagues show that millions of bees are dying because insecticides like neonicotinoid pesticides that are mainly suppressing the immune system of bees.

In fact, the research team discovered that a protein family similar to what found in other animals is responsible for regulating the immune response in bees. The researchers found out that once bees are exposed to lethal doses of the neonicotinoid clothianidin, the leucine-rich repeat protein family (known as LRR) can suppress the activity of a key protein involved in immune signalling, called NF-κB.

When the researchers infected bees (who were exposed to neonicotinoid pesticides) with a common pathogen known as deformed wing virus, there was a significant increase in replication of the virus. The virus is known to be common in bees but it’s kept under control by the bees’ immune system. However, the bees exposed to neonicotinoid pesticides have a little chance of survival since the insecticide suppresses the immune system of the bees.

“The reported effect on immunity exerted by neonicotinoids will allow additional toxicological tests to be defined to assess if chronic exposure of bees to sub-lethal doses of agrochemicals can adversely affect their immune system and health conditions,” says team member Francesco Nazzi of the University of Udine. “Moreover, our data indicate the possible occurrence in insects, as in vertebrates, of a neural modulation of the immune response. This sets the stage for future studies in this research area, and poses the question on how neurotoxic substances may affect the immune response.”

As much as biotech companies and their financial beneficiaries want to pretend that the problem has absolutely nothing to do with GMOs at all, but rather the pesticides, the fact is that 94% of GMO corn are treated with neonicotinoids and since the introduction of GMOs, the use of pesticides has increased by 500 million pounds:

Millions of bees die because of Neonicotinoid pesticides manufactured by Bayer and Syngenta and 94% of GMO corn in US is treated with either imidacloprid or clothianidin pesticides. As a matter of fact, majority of GM corn and soy are treated with neonicotinoid pesticides. Also, despite the false promises of biotech that GM crops will reduce the use of pesticides, the truth is that since introduction of GMOs, the use of pesticides have increased by 500 million pounds. In fact, according to the Pesticide Action Network of North America (PANNA), 94 percent of U.S. corn seeds are treated with either imidacloprid or clothianidin and as a result, honey bees are subjected to increasingly toxic load of neonicotinoids in corn fields.

While EU countries implant a two-year ban on the use of toxic neonicotinoid insecticides – clothianidin, imidacloprid and thiamethoxam – USDA once again fails to ban these toxic insecticides:

More and more evidence are merging that neonicotinoid insecticides have an important role in decline of bees’ population. Besides harming bees, the new studies suggest that neonicotinoid pesticides can also be harmful to human’s health.Neonicotinoid pesticides remain in every part of the plant including roots, pollen, leaves and nectar and if bees, pests or bugs drink water from the plants’ droplets, the neurotoxin kills them right away.
The genetic engineering has failed to keep its promise of using fewer pesticides and insecticides:

A report by Charles Benbrook (a research professor at the Center for Sustaining Agriculture and Natural Resources at Washington State University) shows that since the introduction of GMOs, the use of chemicals have increased by 500 million pounds.

Didn’t biotech promise that GMOs would be helping the environment while feeding the poor and hungry? Well, GMOs have had the opposite results and have led to many problems in US and the world agriculture (from superweeds and superpests to spread of new diseases in the soil) and environment. While neonicotinoid class of pesticides destroys and damages the immune system of bees, Monsanto’s best herbicide weed killer continues to weaken the immune system in human beings.

However, US regulatory agencies including USDA and FDA fail to simply ban these toxic chemicals that are contaminating our air, water and food supply.